visit our profiles on... 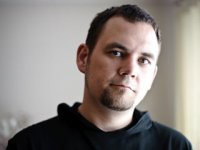 It's a big pleasure for us to announce that UK's psybreaks superstar Hedflux plays Bad Tango's Remix of Explorer in his latest livesets.

Explorer was also features in the January 2011 promomix of Hedflux which he made as a promotion for his latest hammer release "Revolve/Rhythm Prism" that came out on Broken Robot Recordings this January...

We say THANKS A LOT for the big support Steve! You're the man!